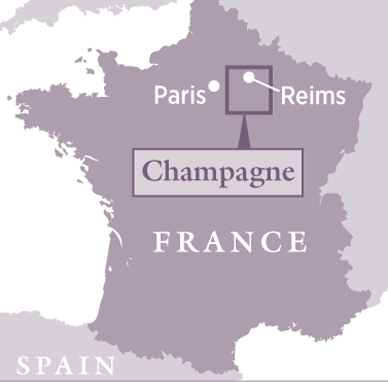 Champagne is the name of the world’s most famous sparkling wine, the appellation under which it is sold, and the French wine region it comes from. While it has been used to refer to sparkling wines from all over the world – a point of much controversy and legal wrangling in recent decades – Champagne is a legally controlled and restricted name. See Champagne wine labels.

Champagne’s fame and success is, of course, the product of many complex factors. And yet there are three key reasons of which we can be reasonably certain. First, the all-important bubbles, which make it stand out from less “exciting” wines. Second, the high prices that Champagne commands, which make it feel somewhat exclusive and special. Third, two centuries of clever marketing to a willing and highly receptive consumer base.

Located at a northern latitude of 49°N, the Champagne region lies at the northern edge of the world’s vineyard-growing areas, with lower average temperatures than any other French wine region. In this kind of cool climate, the growing season is rarely warm enough to ripen grapes to the levels required for standard winemaking. Even in temperate years, Champagne’s grapes still bear the hallmark acidity of a marginal climate, and it was only the discovery of secondary fermentation that provided a wine style capable of harnessing – and even embracing – this tartness.

Pinot Noir, Pinot Meunier and Chardonnay are the primary grape varieties used to make Champagne – a recipe used for sparkling wines across the world. It is a little-known fact that four other varieties are also permitted for use in Champagne and are still employed today, albeit in tiny quantities. They are Pinot Blanc, Pinot Gris, Petit Meslier and Arbane. All seven varieties are still used together in at least one producer’s Champagne; the Laherte Freres Champagne 7 is the most salient example. (© Proprietary Content, Wine-Searcher)

Champagne’s particular combination of grape varieties did not come about by choice or design. Once upon a time, a much larger range of varieties was used, but this has been whittled down and refined over the centuries. As with so many French wines, it was the Champagne region’s terroir (specifically the climate) which dictated which grape varieties would be grown in its vineyards. Pinot Noir, Pinot Meunier and Chardonnay are among very few varieties capable of performing in northern France’s cold, wet climate, so naturally they prevailed. Interestingly, Dom Perignon – the monk erroneously credited with the invention of sparkling wine – is said to have encouraged the use of black-skinned grapes over white. This advice was given on the basis that the wines produced from Pinot Noir were less prone to re-fermentation, which had not yet become a controlled part of winemaking in Champagne.

Each Champagne variety has its own particular qualities and benefits. Pinot Noir contributes good palate weight and darker, meaty aromas. Pinot Meunier gives good acidity and a certain fruitiness which shows most obviously in younger wines. It also buds later and ripens earlier than Pinot Noir, making it less susceptible to rot-inducing springtime rains and crop-damaging Autumn frosts. Chardonnay is said to bring elegance and finesse to Champagnes, along with a certain creamy roundness and lifted stone-fruit aromas.

The first wines produced in Champagne – more than a thousand years ago now – were unlike those we know today. They were typically pink-hued still wines made mostly from black-skinned grapes. There was certainly nothing like the variety of styles we now enjoy.

Depending on exactly how a Champagne is made, can take any one of various forms. The key Champagne styles differ in their color, sweetness, base grape varieties, and whether they are the product of a single vintage or several (Non-Vintage). The whites may be either Blanc de Noirs (made from black-skinned grapes), Blanc de Blancs (made from green-skinned grapes) or just plain Blanc (made from any combination of the permitted varieties). Pink Champagne Rosé is made either by adding red wine to a white blend or sometimes by fermenting the juice in contact with the skins. These types all come with varying degrees of sweetness – not necessarily the result of residual sugar, but due to the addition of a dosage just before the wine is finally bottled.

The production process for Champagne is similar to that for other wines, but includes an additional (and vital) stage, during which a second fermentation is started in the bottle by the addition of yeast and sugars. It is this that generates the carbon dioxide bubbles responsible for the pop and sparkle that are the symbols of Champagne.

All Champagne must spend at least 12 months aging on its lees – the spent yeast cells from the second fermentation. An extended period on lees beyond this can have a marked effect on the yeasty characteristics of the final wine. Non-vintage Champagnes must mature in bottle for a minimum of 15 months in total before release (i.e. an extra 3 months after the yeast sediment is removed at disgorgement) though in practice 2 to 3 years is a more typical figure. Vintage wines must spend 36 months in bottle before being sent to market, though most are released after 4 to 10 years.

Most Champagne is sold without a vintage statement, making it “Non-Vintage” or NV. The main reason for this is the variability in vintages which results from the marginal climate here; by blending vintages together, the effect of a bad year is lessened. In years of exceptional quality, however, many houses release a vintage Champagne (millesimé in French) made exclusively from grapes harvested in the stated year. These are typically designed for longer bottle ageing and are made to higher quality specifications.

Aside from the climatic conditions of the particular vintage and the characteristics of the grape varieties, there is a third component in the distinctiveness of Champagne. The landscape that earned Champagne its name (it roughly translates as “open countryside”) undulates very gently over the white, calcareous soils of the Paris Basin. This famous chalk is distinct from the limestone soils of other French wine regions, being much finer-grained and more porous. This looser structure means that its mineral content is more readily absorbed by the vine roots, and it also provides excellent drainage – avoiding the risks of waterlogging. A further benefit is that this permeability allows access to the water resources far below, promoting strong root development and ensuring a continuous water supply.

Even within this relatively consistent terroir, there are variations in soils and climate that make different areas better suited to the needs of the three main grape varieties. The appropriately named Cote des Blancs – and particularly the Cote de Sezanne – are where the finest Chardonnay sites are found, while the Montagne de Reims and the Vallee de la Marne are ideally suited to Pinot Noir and Pinot Meunier.

In addition to its core Champagne appellation, the region has two appellations for still wines: Rosé de Riceys and Coteaux Champenois. 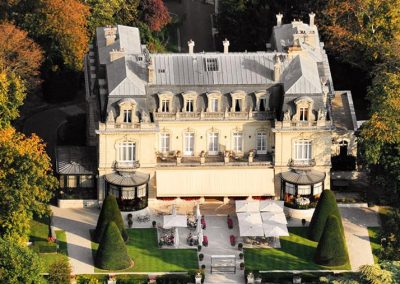 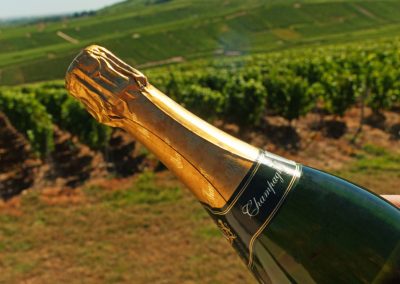 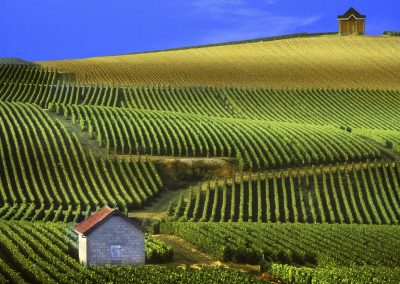